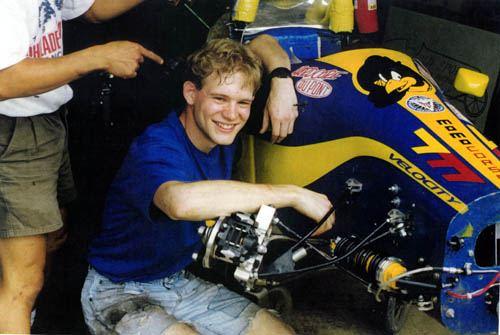 Back in the summer of 1997 I was a towheaded recent college grad. I’d spent the last several months working with a select group of hooligans (University of Delaware Mechanical Engineering Majors) building a Formula SAE car. When it was finally ready to run, I volunteered to be the first Test Driver. Here is the story, as told by my friend Brian Davison who witnessed the whole thing.

Saturday, June 15, 1997. It’s an overcast day, mid 70’s, birds chirping in the background. Aspiring young race driver Stefan Vapaa apprehensively slides into the monocoque of the University of Delaware’s first Formula SAE car. His apprehension is justified, climbing into an untested brute of a car for the first time while being told by his hotshot crew that a helmet is not only unnecessary, but unsafe and in poor taste. A crowd has gathered to witness the first shakedown run of UDFSAE-97 Mk.1. This crowd is about to grow in the following minutes.

Master engine tuner Brian Davison fires up the motor and lets it idle while trying to gain a feeling of whether or not it’s lean enough to burn the motor, or whether she’ll run well enough to scare the hell out of the driver. Jeremy Freeman, master electrical hack, welder, lover, and Sam Lee, fabricator, aluminum polisher, harasser of all things Jeremy, go through a thorough inspection and systems rundown with driver, Stefan.

The time has come… Stefan tries the newly reworked hand clutch, stands on the brakes, takes a deep breath and engages first gear. Master engine tuner Brian Davison takes a deep breath also, not for Stefan’s sake (you can always find another crazy driver), but for the safety of his beloved ’67 Mustang, currently sitting in the line of fire. Stefan wastes no time (either from impatience fueled with adrenaline, or because of the Herculean effort required to hold the clutch), dumps the clutch, and rockets down the driveway spinning tire. He gradually coasts toward the end of the driveway and applies the brakes cautiously. They work. He slows. The car turns. The process begins again. And again. And Again. And then something happens… cockiness sets in. Young hotshot driver Stefan Vapaa runs through first gear, second gear, third gear, the yard, the street, and a split rail fence.

When the safety crew (AKA the hotshot crew of previous note) arrives, they find an obviously delirious driver. He’s out of the car, rambling on about how powerful the masterfully tuned motor is. He doesn’t even mention the wreck, which has gained quite a bit of interest in the neighborhood, especially the guy who’s split rail fence has been rudely disassembled by a blue, yellow, and Stefan projectile. Once we establish that the driver is indeed all right, well, with Stefan that’s a relative term, extraction of the car begins.

Later, through a thorough inspection of the car coupled with an interview of the driver and nearest crew member, Sam, a complete description of the events leading up to Mr. Vapaa’s Wild Ride was made. It seems that having tasted the outrageous acceleration of UDFSAE-97 Mk.1, Stefan understandably became an addict of the worst kind. His blast through three gears required the first use of the carbon-carbon brakes in anger. The brakes worked exceptionally well. So well, in fact, that they completely wrapped the 3/8″ tubing of the control arms into a pretzel, shearing a rod-end and the pullrod. The front upright is now better described as an invert, having been wrapped almost 180 degrees. This sudden redesign of the front suspension geometry resulted in a total lack of steering and effective front braking, turning the race car into a projectile. And this is just the beginning. Murphy’s law being what it is, if an open cockpit car were to shoot toward a fence, a rail of said fence will be right at head level. Also, do to Murphy, the six-point “safety” harness would result in keeping the drivers head at that level. Finally, do to a general atmosphere of harassment and machismo, the hotshot crew would refuse the request of a helmet under the supreme logic that the driver would be safer without one, because he wouldn’t feel as secure in the car, and therefore wouldn’t be as willing to try something stupid. Sounds similar to the WWI philosophy of no parachutes in fighter aircraft…

In the end, an upthrust arm and rotting wood saved a English degree holder from having some sense knocked into him. The monocoque survived it’s first (and only, please) 30mph crash barrier test with perfect marks. Not one sign of damage or of suspension members even attempting to pull through. Everything but the suspension arms themselves is fine. We now need some tubing, much bigger than 3/8″, and some new rod ends and we’ll be ready to go at it again…

See you all later, Brian 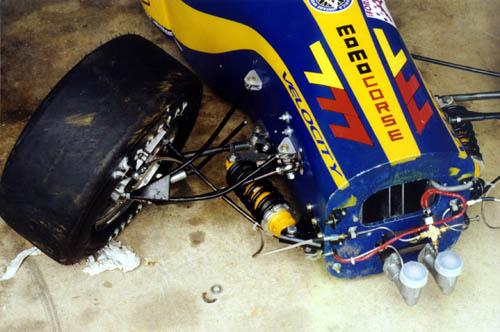 OK, not being familiar with the car you might have some difficulty understanding what is wrong with this picture. Well, let me tell you.

The upright can no longer be thus described. A more apt description might be “the upwrong” or something like that.

If you follow the line from the front of the lower A-arm to its connection point on the upright you might be able to tell that it is now located at a point somewhat higher than the connection point of the upper A-arm. This is patently WRONG.

Here I am with my good friend Sam pointing out whom the guilty party is. The nerve of some people I swear! I was only putting it through its proper testing paces.

It is about now when my father decides that he was right all along and that a great deal of money had been wasted on my education. He feels that considering my somewhat disturbing record of twisted metal and the alarming lack of harm to my person, I could make quite an excellent living as a “Research and Destruction Technician.”