The racecar doesn’t have a speedometer, or at least not an accurate one. So when people inevitably ask “How fast?” I have to reply “about 5500 RPM” or some such number.

I am rewarded with a blank stare that says

I don’t SEE a second head, but there must be an explanation for what just came out of your mouth.

While that conversation will always be awkward, the below information may be able to help a little. 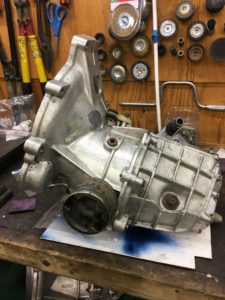 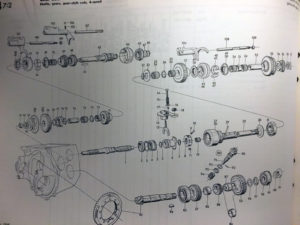 The SAAB three cylinder two-stroke and four cylinder four-stroke V4 cars all used nearly the same gearbox. Early cars had a three speed while later cars had a four speed. Early housings were cast iron, then cast aluminum, then finally cast aluminum with strengthening ribs on the outside. Bell housings changed from the two-stroke to the V4 but the gearboxes all bolt up. All the (four speed) gear ratios were the same. Ring and pinion ratios, however, changed a fair bit over the years.

NOTE: All of the above does not include the SAAB Sport and Rally competition parts.

What this means is that if you feel like changing gearboxes (or ring and pinion sets), you can tailor the ratio to your needs.

Below is a table of all the ring and pinion sets that have been available for the SAAB two-stroke/V4 gearbox.

If you aren’t sure what final drive you have in your old Saab gearbox… Simply pull the fill plug for the transmission out and shine a light in there. Spin the ring gear around and look on the edge of it until you see a series of numbers. For example, on the ring gear in Dad’s Quantum Formula S it had the number 481 scribed into it. Then, stamped into it was the sequence (with spaces): 800373 42-9 9 67.

Then you need to be able to convert arr-pee-emm (RPM) into road speed using the final drive ratio you’ve chosen.

I’ve failed miserably at getting the javascript and calculator form to work within this WordPress post. None of the plugins or workarounds I’ve tried work. So I created a basic HTML page and will send you there to do the calculations. I’ve placed it on my FormulaSAAB site as I use it there as well. Just plug in the appropriate numbers and click the calculate button.

In addition to the stock gears, there were three SAAB Sport and Rally gear sets fabricated. Special 1, Special 2, and Special 3. These gear sets provided close ratio options for those competing with their SAABs.

Close ratio sets “Special 1” and “Special 2” are the most commonly found, but are still extremely rare and difficult to come by. The “Special 3” set definitely existed because I’ve seen pictures on the internet (that means it must be true), but I’ve never seen one available for sale so don’t think of it as an actual option.

My Dad and I put together a spreadsheet that calculates the speed in various gears, in each of the 4-speed gear sets, using 4 of the most common ring and sets plus the super-short SS&R 35/6 (5.83:1) that we have installed in the Sonett currently. It can be modified to use any tire diameter you choose by editing the number in cell B29. Click the spreadsheet icon to download the spreadsheet (located on FormulaSAAB.com).

I have provided all the tire diameters we currently use, plus the stock size, for your convenience.