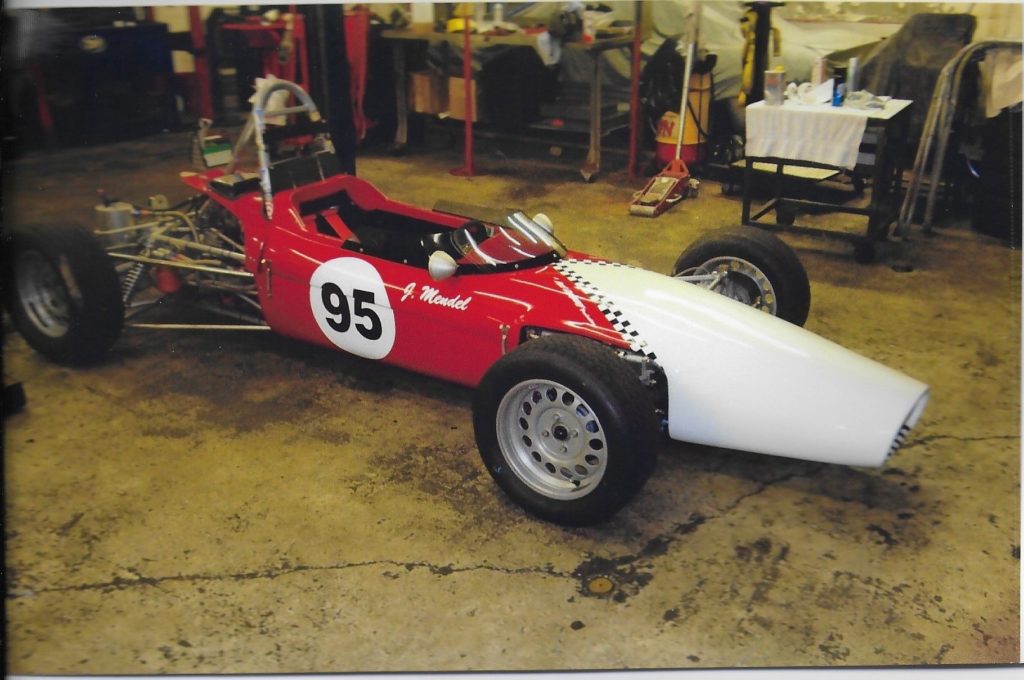 chassis 100 is a Formula Ford built in 1969. Happily, I do have a bit of period history of this car.

If anyone can provide more information, please get in touch with me. I will update this post if I obtain any additional history of the car.

Based off the serial number this would appear to be the first MR7 built, or at least the first in 1969.

During Joe Mendel’s ownership the nose received some crash damage resulting from a failed suspension piece at Watkins Glen. He says it occurred under hard braking going into the “Bus Stop”. The repairs leave the nose very heavy with fiberglass and they were unable to replicate the original profile of the radiator opening. The nose is repainted white and receives some checkered pattern tape to cover the paint/tape line.

Joe is unfortunate to crash the car again a year later again at Watkins Glen. He says he encountered an oil slick coming out of the “Bus Stop” and spun into the blue Armco. It is damaged primarily on the right rear but there was also damage to the right front. The body was not damaged further but the chassis, suspension, and drivetrain were all damaged. I think perhaps Joe might want to avoid Watkins Glen in the future. (Thanks to Joe’s comments after reading this post, I can include this information.)

It was disassembled at Fowler Automotive Street and Track, the chassis stripped and repairs begun. However, they were never completed. The parts were stored and the car sat until I purchased it in 2016.

Hi Stefan,
Cool article…couple corrections for you….yes there were two accidents with the car…both at Watkins……a year apart. First one was caused by a front suspension piece (brazed not welded) breaking under hard braking at top of hill going into interloop (bus stop), putting my right front end into the ground and spinning me. Second was a year later after hitting an oil slick coming OUT of the bus stop and going into Armco. My only bad luck spot on any track! Other than that it was a great car and I miss driving it.
Joe
412-315-5992
Mendfam1@verizon.net

Thank you Joe! I have corrected the history and thank you for letting me know my guesses were wrong. I feel kinda bad… The Bus Stop hasn’t been kind to you.