Macon MR7B chassis 105 is a Formula Ford built in 1969. I really don’t have much history of this car prior to the previous owner. If anyone can provide more information, please get in touch with me. I will update this post if I obtain any additional history of the car.

This car may have been the second “B” spec car built, based on a note I have in my scrapbook files. I don’t have a source for that note yet so I don’t consider this definitive at all.

The car was crashed in its last event and never repaired. It was heavily damaged on the right side, mostly in the engine bay area. There was no damage to the body but the chassis, suspension, and drivetrain were damaged enough that Jay decided to not fix the car. It was disassembled at Fowler Automotive Street and Track where the parts were stored and the chassis hung from the ceiling. It was from there that my ownership began.

Below are the photos I was provided at the time of sale as well as the ones in the logbook. 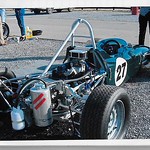