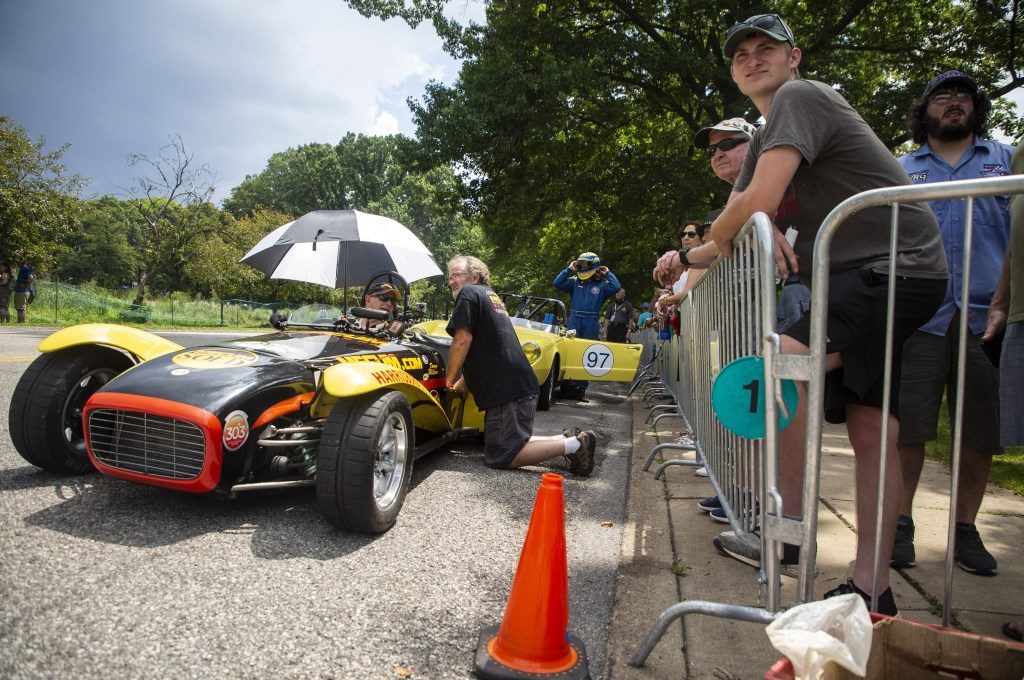 A Tales from the Track Episode

This is a story about the moment when you have nothing to lose, when frustration drives you to the breaking point, and when assistance appears from unexpected places.

The Pittsburgh Vintage Grand Prix (PVGP) and the legend that is the Schenley Park course make up one of the greatest challenges in vintage racing today. Started in 1983 and held every year since, it stands alone today as the only true vintage circuit race run on city streets in the United States.

Why is it the only one? I don’t know for certain, but it has to have something to do with a unique blend of charitable giving, enthusiasm, and volunteerism twinged with not a little temporary insanity that seems to revisit a select group of folks on an annual basis. It is free to all spectators and the pits are open to the public. It is absolutely brilliant.

The track map indicates 20 corners within 2.2 miles. By most measures, that’s a busy lap but that’s not the half of it. There is no runoff. None. There are no straights worthy of the name, yet top speeds can be over 100 mph for many cars. You may actually need 1st gear, possibly more than once per lap. The course is lined with concrete curbs at a minimum, stone walls or jersey barriers for a large portion, telephone and light poles, fire hydrants, and a monument. It goes over a bridge with a 120 foot drop to the hollow floor below on one side and into a lake on the other. The road is heavily crowned for drainage and is only more than two lanes wide in a couple of sections. As I said, it is a challenge. And as I insinuated, it is a little bit insane.

I take it easy during practice, reminding myself of braking and shifting points. That goes well and the car feels about right.

Qualifying is important on any tight and twisty track so I give it the beans and turn in my best lap ever at this track, which is good enough for 2nd on the grid in a field of 36 cars. All is not well however.

It was on my first lap that I turned my best time, because not long after that the clutch started to slip. It becomes a real problem by lap 3, and by the 4th lap it is nigh undriveable. I pull in, drive to the paddock, get out, take my helmet off, and stare at the car. I stare hard at the damn thing, waiting for, for, for inspiration I guess. I really have no idea how I am going to fix this.

I suspect the clutch is being oiled, possibly by a leaky crank seal. I actually have a spare crank seal, but I can’t imagine why I bothered to pack it? I can’t pull the iron-block V4 engine out of the car at the track, and even if I could, there’s no guaranteeing that is actually the problem. I can clean the clutch disc (a bit) by shooting a can of carb-cleaner in the inspection hole on the bell housing, but that just delays the inevitable. Still, that’s all I can think of. 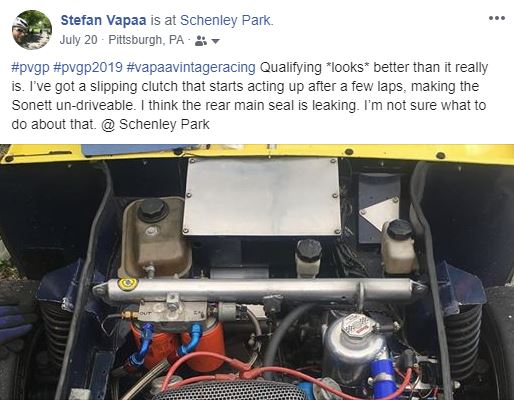 Stefan Vapaa is at Schenley Park
July 20 Pittsburgh, PA
#pvgp #pvgp2019 #vapaavintageracing Qualifying *looks* better than it really is. I’ve got a slipping clutch that starts acting up after a few laps, making the Sonett un-driveable. I think the rear main seal is leaking. I’m not sure what to do about that. @ Schenley Park

This is where it starts to get weird. (full names redacted to protect the innocent)

Santo Xxxx I saw eno dpasquale pour coke on the edp special… it worked
David Xxxx Santo Xxxx no way
Santo Xxxx Imagine what it does to your stomach!
Stefan Vapaa I think oil is getting to the clutch, but I will try ANYTHING at this point.
Santo Xxxx he drilled hole in the bell housing … saturated it with brake clean … let dry , then a coke bath
Stefan Vapaa Santo Xxxx I have an inspection window in the bell housing. We already emptied one can of carb cleaner through there. Now I just need some Coke. Do you think Pepsi will work? (The food truck sells Pepsi products!)
Santo Xxxx can you see the disc through the pressure plate?
Santo Xxxx 7:35 flour ! https://www.youtube.com/watch?v=5OAT69NQXA0
Santo Xxxx heat makes the coke sticky flour dries the oil… the EDP was purdy powerful… worst that can happen is you bake a funky cake
Santo Xxxx Start at 6:10…then 7:35 https://www.youtube.com/watch?v=5OAT69NQXA0…
Stefan Vapaa Santo Xxxx Maybe, I can look in the morning. This is the pressure plate. https://i.ebayimg.com/images/g/NuQAAOSwUO9bmPLO/s-l1600.jpg
Santo Xxxx excellent access keep it depressed while you Frankenstein it
Santo Xxxx and rotate slowly
David Xxxx Santo Xxxx son of a gun!!!!
Stefan Vapaa Well, we’re going to try it. We’ll stop by a grocery store this evening.
Santo Xxxx fingers crossed

At 6 minutes and 10 seconds in to the video, Hannu Mikkola’s Audi Quattro comes rocketing into view as the commentator says

…which is now suffering from a slipping clutch. Coca-Cola is poured onto the Quattro’s clutch in an attempt to clear away the oil which is causing it to slip.

Mikkola is still struggling on and while the car is quick on the stages, the driver is fighting a losing battle. Oil is still leaking onto the clutch, keeping the mechanics busy and giving Team Manager David Sutton more headaches.

Then, as the video shows mechanics with a pitcher puffing powder over the engine, the on-site reporter interviews David Sutton

What was that powder you were putting in there just now?

Is that the answer then is it?

Its worked perfectly on the last two or three special stages. Seems to have dried the oil out of the clutch and, uh, we’re back…

Where’d you get the idea for that then?

We got it from an Irishman at the side of the road!

The nearest grocery store is in Squirrel Hill. On Sunday morning we pick up a six pack of Coca-Cola (I figure it is best not to mess with a classic recipe) and a bag of All Purpose Bleached White Flour. We raise the hood on the Sonett and lay out the “tools”. Passers by pause, some do a double-take, and one summons up the courage to say “I have to ask, what is the Coke and flour for?”

I punch a hole in the cap of the first bottle of Coke. I create a funnel extension out of some cardboard. Dad steps on the clutch and I squirt about 1/3rd of a bottle of Coke in through the inspection hole on the bell housing right onto the clutch disc. Rotate and repeat. Then, I set up the funnel and the cardboard extension and pour approximately 1/3rd cup of flour in where the Coke went. Some goes where it is aimed and after two whole bottles of pop and roughly 3 cups of flour in, I guess I’m done.

A small crowd has gathered.

I start the engine, step on the clutch, and select 1st… “gggrrriiinnnddd”.
Correction, I attempt to select 1st gear. The clutch thing appears to be a bit stuck, actually.

It is at this precise moment that Dad starts to believe. The look on his face says “Well I’ll be a monkey’s uncle, this might actually work.”

I turn the engine off, select first gear (no problem now of course), and start the engine. Slowly I pull out of my spot and line up pointing down the paddock. Rev her up, drop the clutch, and leave two nice black lines 4 feet long. “Well I’ll be…”

The Super 7 has the same engine displacement as my Sonett, significantly more tire, and half the weight, so I suspect that there’s not a lot I can do about it. The Elan is a couple hundred pounds lighter, again has more tire, and a little bit more displacement, but still is a better match. Our qualifying times suggest I’ll have a good race with him but I can’t help but thinking “…if it holds together!”

The plan the Dad and I agree on is “Do the bare minimum to maintain my place.” That means making sure the clutch is engaged before tromping on the gas and shifting at lower RPMs.

Race Start: Race control has dictated a single-file start due to track damage that occurred prior to the event. Denny jumps away at the green flag to easily lead into turn 1. Employing “The Plan”, I try to close the gap on the brakes and in the turns while treating the clutch with respect. As a result, I can still see the Seven at the end of the first lap, but it is pretty obvious now that his power-to-weight advantage is too much to overcome.

I can see Joe’s Elan in my mirrors. The gap is very hard to judge because all of my mirrors are the wide-angle convex type, but it looks like he’s consistently about two seconds back. As long as the Sonett holds together and race traffic isn’t too bad, this should work.

Race lap 5: I catch and pass the first bit of lapped traffic in turns 6 and 7. When I get to turn 13 there’s a yellow flag being waved rather rapidly. An MGB has slid off course exiting turn 13 and parks with two wheels on the pavement and two wheels over the curb on the grass. When I get to him on my 5th race lap, it is just a local yellow. Arriving at turn 5 on the next lap, they throw a double-yellow.

Little did I know at the time but the weather was beginning to turn and lightning was observed in the distance. Race control was getting concerned about spectator and corner-worker safety. So we do a couple more laps under yellow and then they throw the checker to end the race. It is disappointing for the spectators, but good news for my clutch!

I start 2nd, finish 2nd, and the clutch never even hints at complaining, much less misbehaving. I get to stand on the podium at my favorite race in the world.