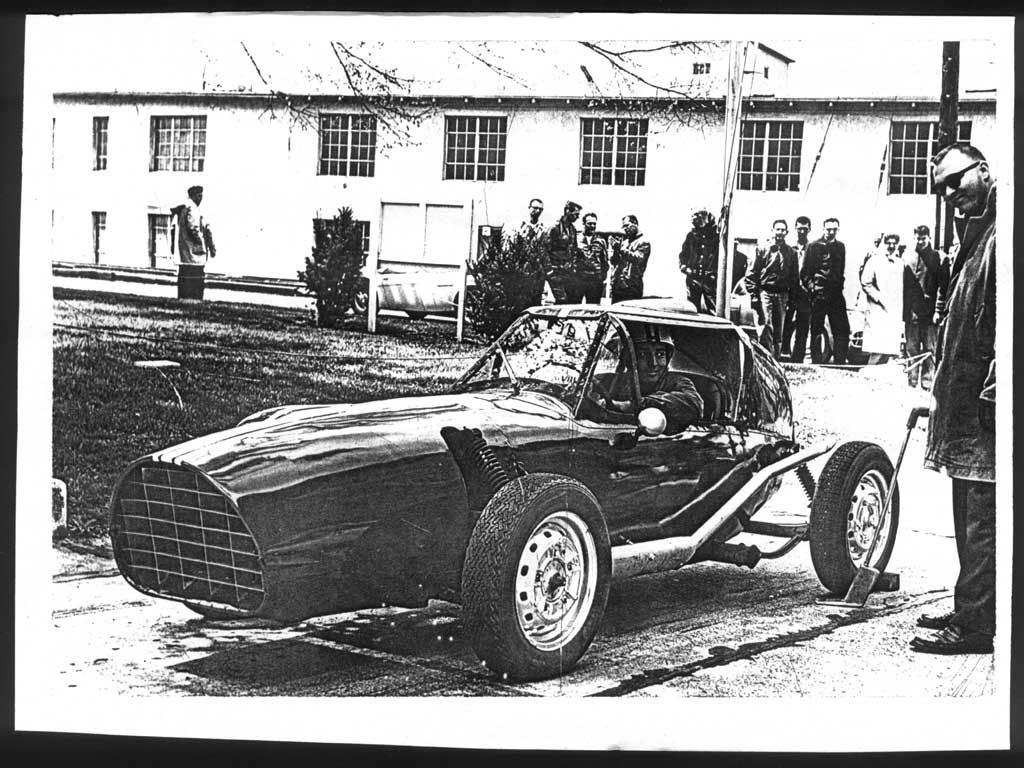 In 1959, some racers in the Wilmington Delaware (USA) area built one of the wildest ice racing specials ever seen up until that time. It was known simply as “The Ice Racer”.

The photo below was taken at the Yorklyn Hillclimb in Yorklyn, DE. The Yorklyn Hillclimb was (in)famous for bringing together the local road racing crowd with the local drag racing crowd. It ran from the bottom of the hill near the NVF Co. (National Vulcanized Fiber Company) plant up to the top of Gun Club Road. As the story goes, the drag racers complained because there was a turn on the course and the sports car racer complained because there was only one turn on the course! Additionally, in order to make the course more challenging, there was a point where the racer had to stop, reverse a bit, and then take off up the hill again. The man in the driver’s seat is our friend George Alderman. George had a highly successful career racing sports cars, formula cars, and Trans-Am in the 50’s and 60’s and continued racing successfully into the 90’s. His listing on The Road Racing Driver’s Club website says George:

Began racing in 1956 with an ex-Formula 3 Cooper-Jap. SCCA Formula 3 National Champion in a Cooper-Norton in 1960; and Formula Libre Runoffs champion in 1964 in a Cooper-Alfa. Ran several SCCA pro series in the mid-60s including the USRRC, Trans-Am and Can-Am and in Trans-Am Two-Five Challenge in the early ’70s. In ’71 and ’74, Alderman won the IMSA Baby Grand championship with a Datsun 510 and an AMC Gremlin respectively. He competed successfully in IMSA’s GT, GTO and GTU categories from ’71 through ’89. Was overall winner of the ’92 Longest Day of Nelson round-the-clocker co-driving a Caterham S-7.

Spectating in the background (4th from the right, including the starter) is another friend David Redmond.

Recently, Pennsylvania based SAAB and racing aficionado Don Fatzinger posted some photos (collected into a video/slideshow presentation) of ice racing on Lake Naomi in Pocono Pennsylvania (USA) in 1963 and 1964. The . It is seen below. The pictures are Fred Slifer photos. They are not chronologically ordered, but you can tell the difference between the events by the weather conditions.

The Ice Racer chassis was built by Al Stoudt and George Alderman and was completed in 1959.

The aluminum body supported by band steel was fabricated by local panelbeater Jimmy Diaz. There are two main tubes (approx. 6″ dia.) running the length of the car. The windshield might be from a Bellanca airplane. It was scrounged from the grounds of the Bellanca Aircraft Corporation of America which was based in Wilmington, DE at the time. However the actual plane it came from is unknown.

The engine was a highly modified SAAB two-stroke “mixer”. It had three small reed-valves and carburetors (possibly from a chainsaw) plumbed into the top of the crankcase. These provided low-throttle input air/fuel for better torque. A Solex 40 PII was fitted in the normal location on the intake manifold and provided the high-throttle input air/fuel mixture. George reports that this worked fantastically and he even kept that motor and ran it in his street car after the Ice Racer was retired.

It is just like sitting in an airplane cockpit because the “door” to enter the driver’s area is the left side window mounted on a piano hinge.

The car is wisely outfitted with a defroster.

One very interesting feature is the auxiliary brake. Someone took an old leaf spring and cut it in half. On one end they bent down the edge and cut teeth in it. On the other end it was mounted to the chassis of the car via the pivot.

It was hooked up to a hydraulic pump that could be activated via a button and stick inside the cockpit. The “brake” was lowered to impact the ice as the car approached a turn and… “VIOLA!” an ice brake! It must have created an impressive display of ice and snow flung into the air. I suspect that being mounted on the left side it helped the car turn left too. Sadly, it was deemed illegal and could not be used in racing. It reportedly made it very easy to change the rear tires though.

John “Jake” Jacobson acquired the car from George Alderman. It was a package deal with a big old lathe he got from George. Basically George said “If you tow it out of here you can have it.”

Jake has since passed away and his son Bill has it now. It currently sits as you see it here, awaiting attention.

George and I are down for the Rolex 24 hr. And found this series of photos. I was 13-14 yrs. old and helped a little in the construction of the car. The bw photo of george and another at Lex du Pont’s mother’s house had Ray Lloyd, a great person, fabricator, welder and later corporate pilot.

Hello Mac,
Thanks for getting in touch. I hope you and George had fun at Daytona. I imagine the car must have created quite a stir in its day. Thanks for the note about Ray Lloyd, I appreciate it.